Does something stink here folks? See also the Victoria Times Colonist story and the Vancouver Sun Vaughn Palmer editorial all on the same story. Remember the RCMP legislature raids and the now famous so called 'Basi Gate' court case that in this Editor's opinion has been stymied at every junction with on going procedural wrangling that has delayed this whole case for what seems like ages so far with considerable assistance it would seem from the provincial government. What are they trying to hide? What and when is the stink going to reveal itself and it's sources? Note the desperation to keep a lid on all of this until the election is over. 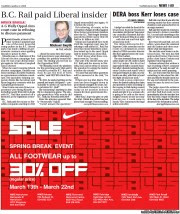 Posted by Langley Free Press at 10:50 am