Is Grant Ward right? Should Councillor Ward ignore the will of the voters? Will the voters punish Ward in 3 years in the next election? Ward says the following:

'..Coun. Grant Ward said Green is in for a bumpy ride from the pro-Alberts majority on council.

“Alberts was one of the finest mayors we’ve ever had. The electorate left council intact to hold Green in check. I don’t feel comfortable with the stuff he’s espousing, like zero tax increases. Zero budgets don’t work,” Ward said.

“It will be business as usual. Just because someone is new doesn’t mean things should change,” he said' 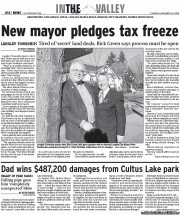 Langley Township mayor-elect Rick Green says he will end secret land sales and use the money created to give residents a tax freeze. “There is no public inventory of township land,” Green said yesterday. “There has been no transparency and public...read more...
Tech Tags: The Province newspaper News

Posted by Langley Free Press at 12:37 pm No comments:

This posting talks about two things that are key top of mind with this Editor. Social Media, which includes you, the public's input to and with us, LFP, the definition New Media or rather Social Media. The 2nd point I will discuss are your comments about editing in our Social Media on LFP and other similar sites!

Editing & Caution in the Social Media

First, apologies for those about our editing. Your most recent corrections, bitches and concerns are valid and I acknowledge them all and thank you for them.

Sometimes we have to edit out the things that are said personally about people herein. Fair & even angry comments about politicians are OK. But they can and do cross the line especially when references are made to their personal lives and things about politicians about legal or police matters or even questioning their moral and legal ethics. Secondly we also get a lot of personal comments about individual unelected bureaucrats in various levels of government. They are not politicians and are individual private citizens that attacking them individually can be very unfair and libelous. Please see this link of ours that outlines some of the dangers in expressing yourself publicly.

I especially draw your attention to these specific comments below,

"Fair comment is allowed to express statements on
matters of public interest, as long as the statements are not
made with ill will, spite, or with the intent to harm the target
of the comment."

"Fair comment is permissible as a statement of opinion
(no matter how ludicrous or irreverent) based on facts which
are correctly stated, and which does not allege dishonorable
motives on the part of the target of the comment.
Libelous, defamatory, injurious, slanderous & harmful
comments tending to maliciously discredit, malign or be
harmful".

Take specific note of the fact that comments made with ill will, spite, or to maliciously discredit, malign or be harmful or with the intent to harm the target of the commenter are the keywords to be leery of when writing! I will ALWAYS edit these! Attack the issue vehemently that a politician makes not the politician personally and maliciously!

So apologies, but often, especially during an election, I have had to be brutal in my editing and as such may have inadvertently changed your intent of your comment but the alternative was to not publish it at all! Sometimes in my haste in publishing I have also allowed or perhaps created spelling and syntax errors as well. Again my apologies. I draw no paycheck and don't have much help so permit me my errors please.

I do this for the love of democracy & free speech and because of striving for an ALTERNATIVE voice in the Langley political and media wasteland & wilderness to especially counter Councillor Bateman's political and his political promotional web presence in his what seems like 4000+ websites (LOL) and the partisan and often times pathetic local news reporting and especially their obviously partisan editorials at times.

"It's not newspapers that might become obsolete. It's some of the editors, reporters, and proprietors who are forgetting a newspaper's most precious asset: the bond with its readers,"

Murdock further described it as a culture of "complacency and condescension" in some newsrooms.

"The complacency stems from having enjoyed a monopoly--and now finding they have to compete for an audience they once took for granted."

"It used to be that a handful of editors could decide what was news--and what was not. They acted as sort of demigods. If they ran a story, it became news. If they ignored an event, it never happened," Murdoch said. "Today, editors are losing this power."

"The Internet, for example, provides access to thousands of new sources that cover things an editor might ignore. And if you aren't satisfied with that, you can start up your own blog, and cover and comment on the news yourself. Journalists like to think of themselves as watchdogs, but they haven't always responded well when the public calls them to account."

So please, apologies and allow this Editor the occasional error. But do continue to shoot the LFP messenger if and as you wish but in any event please also continue to view, read, comment and share your Langley political and otherwise concerns about me, our biases (we do have many!) LFP and especially the local politicians and media.

Sincerely Yours,
Your lonely, misunderstood and very fragile (LOL),
---LFP EDITOR---...
Posted by Langley Free Press at 11:55 am No comments:

LFP Will Post a "The Night After" Overview, Thoughts & predictions in the next day or two!
Stay Tuned and meanwhile, give us all your comments & views on Langley's elections outcome!
Township Mayor - Votes

Posted by Langley Free Press at 11:42 am No comments:

LFP welcomes Prost who will join us with his satirical and unique cartoons "Prost's Perspective". Our photog, Bob, reported that the two major issue he saw at last night's Langley City Municipal debate was about a bandshell and homelessness as a distant contender! Bob' s videos of all the city Council Candidates will be published in the next 24 hours. Hopefully this will help those who have not met the candidates to help make their ballot choices. I understand that Dave Hall provided the best counterpoints. Dave would you care to expand on this for our readers?...
Posted by Langley Free Press at 11:15 pm No comments:

UPDATE Nov 11 - Note that in today's Langley Advance Mr. Ross now added his City Trustee endorsements of MacNeil & Fedora. Any thoughts on this ad in yesterday's Langley Times folks. Just to help you out check out this previous LFP Posting related to this. And then check out another ad previously written about in LFP.

What I don't understand is why all the silent slates in Langley Township? Why don't they just all come clean finally? Imagine what they could save the environment with just one sign and 5 names on it. But let's go further and include their sister slate just like the times of old when the LLT ran a joint slate for school board and council, imagine if Kurt Alberts' silent slate along with these 5 ran single ads, literature and signs? As I said before "If it looks like a slate & quacks like a slate, it is a slate." Who's kidding who?...

Posted by Langley Free Press at 3:28 pm No comments: