From 7pm to 10 pm last night April 27th at the Fort Langley Fine Arts School Chief Sepass Theatre the first ever 'All Candidate Debates' for BOTH Langley Ridings of all the candidates took place. Many people including guest host Rafe Mair commented that it was 'despicable' that two candidates refused to attend. Specifically both Langley Liberal MLAs and Ministers Rich Coleman & Mary Polak chose to boycott the debate. The debate was sponsored by the Langley Teacher's Association and curiously less than 5% of the agenda covered education!

Many people including Rafe commented very negatively on the absence of both Liberal candidates. Some of the words used to describe their boycott were arrogant, despicable, smug and snubbing. It's curious to note that even our local Langley municipal election candidates attend CUPE and International Association of Firefighters sponsored debates for municipal elections. So why won't out Langley MLAs/Ministers?

So it is indeed a very controversial and questionable decision not to attend the debate. Rafe Mair even commented that if he had boycotted an election debate when he was a cabinet minister in the then ruling Socred government, the Premier then would have been furious. He also pointed out that this was another reason that he recommended the public also vote YES for the STV because he bet the two Liberal cabinet ministers would most likely have certainly attended if we had STV! See the Langley Times news report here with more details.

Posted by Langley Free Press at 2:47 am No comments:

Email ThisBlogThis!Share to TwitterShare to FacebookShare to Pinterest
Labels: Education

Rail For The Valley Protests Along Highway #1 Overpasses & Stephany Interviewed

Township Council Votes For 5% Tax Hike AGAIN for Each Year of next 5 years! & Our LFP Cartoonist, Prost's Perspective

Posted by Langley Free Press at 3:39 pm No comments:

Note to Langley Township Council: In case you haven’t noticed, there is a recession out there and it’s now being felt in Langley as shown previously in LFP. When are you politicos going to realize this?

We know that the majority of the current Township councillors derive most of their personal income from the public teat (i.e. Councillors Bateman, Fox, Ward, Ferguson, etc.) but this is no excuse to ignore the financial pain
being felt by many Langley Township taxpayers who don’t have the same luxury of a guaranteed annual income compliments of the taxpayers.

On March 24, 2009, Councillors Bateman, Ward, Ferguson, Long and Dornan agreed to send a preliminary budget increase of 5% out to the public.

Since then, the firefighter's and sports group's “partisan political enforcers” have again been whipped into an overtime frenzy. They have sent many letters/emails to the local papers and council saying: “YES! WE WANT A 5% TAX INCREASE”. One has to wonder why.

Have you ever seen anyone in Langley purposely asking for a tax increase unless there was some hidden agenda?

What garbage and misinformation have these well-meaning citizens been fed? By whom? And for what ulterior motives? Do these groups even realize that they are being politically manipulated? (Or do they even care as long as they think they have political power?)

Mayor Rick Green was elected on a platform to control and restrain taxes. Shortly after he was sworn in as Mayor, he appointed a Finance Committee. This committee was comprised of very qualified members of the public who spent 7 weeks (in between childish outbursts from Councillors Ward and Ferguson) reviewing Township financial records.

The Finance Committee recommended that a .93% tax increase was feasible and obtainable this year with NO CUTS to current Township service levels.

Councillors Bateman, Ward, Ferguson, Long and Dornan have purposely chosen to ignore the Finance Committee’s advice. They did not once raise any of the recommendations put forward by the Mayor’s Finance Committee before they voted to send a 5% tax increase to the public. Why?

So who really controls Langley Township Council? Is it the public? Or is it Township Administration and its [provincial Liberal] lackeys on Council?

You decide but here’s one last example for you to consider.

On March 23, 2009, Langley Township Council received a report from Township staff recommending that Council approve a Mowing Maintenance contract for 2009 to 2011 for $1,075,839 (the “Gold Medalist”). The “Silver Medalist” price was $811,388. Staff recommended the “Gold Medalist” (a $1+ Million price package). The Langley Times this week reported about this very contract debate between Councillor's Richter & Fox and is scheduled to be finally considered again on this Monday's council meeting again.

The difference between these two price packages (on grass cutting alone) is equivalent to a ½ percent annual Township tax increase. This cost difference alone could be applied to much needed service enhancements in other areas like better snow removal or more full time firefighters.

So why are we, the taxpayers, paying more for a service we already have when we could get the same service for less price and still have money left over for other services we really need (like better snow removal)?

P.S. Monday we will see what Council votes on this mowing contract. Bet the Gold plated Group of Six votes for it? We have asked an expert for his comments on this bid process and the above bid summary document about the above Mowing Maintenance RFQ 3PRE09-302 that the Township of Langley requested and got bids for. He pointed out a few interesting things.
In a summary our expert says that especially in government public bids he would never recommend this process. Low price bid should always be the only final criteria. He suggests if concerns about service levels are feared that instead a clearly articulated penalty process be established to handle those in default that would return money or exact appropriate penalties for gaps in promised service. Or he suggests that a performance bond perhaps be part of the bid to recompense for contract breaches.

Another suggestion is that perhaps the Township split the service area into 2, 3 or even four zones to then have better future comparisons and alternate ready emergency back ups and this would certainly require far less equipment by any one super mowing contractor while spreading the wealth around as well and staying away from any real or perceived bias. At worst case, he says if absolutely necessary, that all bidders be invited to first pre-qualify to bid and that they be weeded out (forgive the pun) in this process first and then the contract goes to the low bidder. But again our expert says that this process is also fraught with questionable risks and issues as well, but it is a better compromise.

The bottom line is that this case clearly documents that The Gold-Plated “Era of Entitlement” Has to End and that it is NOT and never has been about cutting the essentials like Fire and Police portions of the Township budget. There is obviously lots of fat or grease that can be skimmed out of the constant 5% annual tax increases other than in protective services! It's time to stop looking and pointing at the must haves like Fire & Police and start looking at the nice to have as demonstrated in this mowing contract case study....
Posted by Langley Free Press at 12:45 pm No comments:

The final battle looms. Will ALC give final Approval to the Bateman/Falcon Liberal Overpass to Nowhere? Kudos to Elisabeth Robson and her green ribbons! 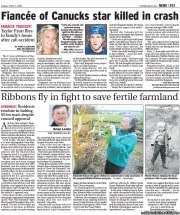 Ask long-time Langley Township resident Elisabeth Robson about the quality of farmland in her neighbourhood that the proposed Mufford/Glover Road overpass will destroy, and she opens the family photo album. “Look at this,” she says, showing a...read more...
Tech Tags: The Province newspaper News

Posted by Langley Free Press at 12:41 pm No comments:

KUDOS to Rachel McHollister of the Langley Times, the TIMES EDITOR and the Langley Times for their article today (probably Friday in Print) on this very significant topic we also posted about on LFP. Stick to it Rachel & Frank until you get proper answers!

The Times specifically reports; "The Times contacted the executive director of the Agricultural Land Commission, Brian Underhill, on Monday." about his comments on appearance of a possible conflict of interest regarding the Mufford Overpass ALC decision that Commissioner Tomlinson ruled on in light of his campaign donations to the B.C. Liberals including Councillor Bateman and Ferguson who both supported the overpass too.

The Langley Times reporter is referring to the Dec. 16, 2008 B.C. Supreme Court ruling that laid down new guidelines for conflict of interest of commissioners of the Agricultural Land Commission (ALC). See more about this in our previous posting here.

The Times reporter goes on to say that despite saying he would respond to her questions immediately that instead: "Since then, The Times has tried to contact Underhill three times, but he has not responded to the messages nor has he been available."

Well done. Journalism to be proud of! Reads just like big time Globe & Mail & Vancouver Sun investigative and probing journalism of questionable pertinent issues that taxpayers should get answers to!

P.S. See here for Elections B.C. Political contributions System search result re: any Tomlinson donations. Any names can be entered and searched at this site....
Posted by Langley Free Press at 5:56 pm No comments:

Canada has lost nearly 300,000 jobs in the last four months, including 82,600 jobs in February according to Statistics Canada!
As you all know Langley Township Council majority decided to once again approve a 5% tax hike for public input and this will likely be ratified at their April 20th meeting as previously reported here in LFP.

We think that this LFP spreadsheet which reflects the dismal outlook of our economy insofar as job loss announcements may be of help to this council in their final decision of whether they stick to a 5% tax increase that they approved for public input.

Remember that this council also said that the Mufford overpass plan was just "preliminary ' too for input as well and even despite overwhelming opposition to it, essentially the same majority of 6 councillors voted for the 'preliminary' design anyhow! So how different will this be for the 5% tax increase proposed by majority of Township Council for public input?

This Editor is betting that they will most likely stay somewhere between Councillor Fox's proposed 3.95% to the 5.00% sent to the open houses. This range will be way above the cost of living increase and way above the Mayor's Finance committee proposed 0.93% tax increase! Another Langley consecutive historically high cumulative tax increase!

So for assistance to the 6 on council who in this Editor's opinion seem to have no limits to their constant tax & debt increases and their constant flamboyant spending spree, we have the following 'Reality Check' resource guide that we hope will help these 6 on council realize what economical times we live in! Maybe, just maybe, this reality check will help keep in check their constant spending spree and tax & borrowing hikes! Not just for this budget but for every few thousands of $ they spend and throw around at every council meeting seemingly too!

Check back here often, because we at LFP will constantly be upgrading the spreadsheet's "Running Job Loss" figures. We will also post the same spreadsheet link on LFP's sidebar too. So tell your taxpaying neighbours to check this spreadsheet to see how many more are losing their jobs and how many of us are forced to tighten our belts. Yet this Langley Township Council in spite of this continues to raise our taxes, increase our debt and spend like there is no tomorrow!...
Posted by Langley Free Press at 1:00 pm No comments: