This LFP Editor has just had enough of the Green VLN slate-mates in unison parroting their ridiculous deception attempt trying to convince us that  they are Independents yet also a Slate! It becomes even more ludicrous when they line up and repeat this one after another at every debate. So I decided to finally highlight and point out this inane Green VLN slate attempt to word craft and word weave this B.S. to us, the Langley Township voters, in the above very short 47 second video. I hope you find it as amusing as I did.

At last night's last election event at the Langley Event Center which by-the-way the Green VLN Slate and slate-mates continually criticize, the Langley Township Election candidates had their final public hurrah before this Saturday's election. One by one they introduced themselves and there after mingled with the audience answering individual questions. This event was organized by an election candidate herself, Sonya Paterson. Good job Sonya. Unfortunately there were far too many empty audience seats.  I'm told that the poor weather may have been the issue. 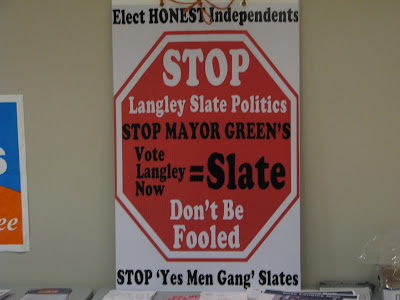 Posted by Langley Free Press at 1:20 am