The Langley Township Firefighters after extensive research officially published their list that they support for council in Langley Township.Their 4'x8' signs pictured here were sprouting up throughout the Township. 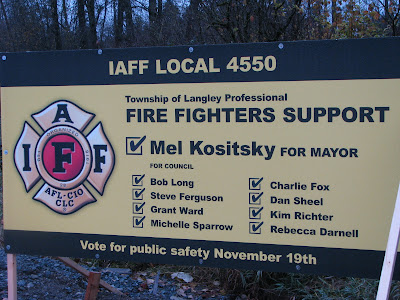 In addition the Firefighters are expected to advertise in the local newspapers as well as drop literature throughout the Township. Before they came to their conclusion the Firefighters had questionnaires that all candidates answered. They also hosted a debate where all the candidates were able to provide their credentials/policies and they also answered  pre-prepared questions that they all got in advance. No ambush there unlike at the three community group's so-called pro Green VLN debate. In addition all the candidates were able to mingle-meet-greet the firefighters and guests at that debate. All the council incumbents except for Councillor Bev Dornan and incumbent Mayor Rick green were endorsed. The Firefighters instead endorsed Mel Kositsky for the Mayor position. New candidates Rebecca Darnell, Michelle Sparrow & Dan Sheel were also endorsed.
Posted by Langley Free Press at 11:07 pm