Mel Kositsky Kicks Off Mayoralty Campaign - Says: "This election is all about trust. The trust... has been broken. It can never be repaired." 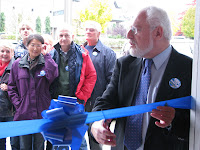 Sunday Oct 30Th at 1 PM and for the rest of the afternoon many people wandered in and out of Councillor Mel Kositsky's new Walnut Grove campaign office on it's grand opening to which the public and politicians at large were invited to. Mel is hoping to beat the rookie Incumbent Mayor Rick Green and the political newcomer/challenger Jack Froese to become the next Mayor of Langley Township in what could well be a tight 3 way race.

Ironically Mayor Green praised Councillor Kositsky before Mel himself announced his intention to challenge Mayor Green. Green said he was running a slate against all the incumbent council except for Mel because he essentially only endorsed and
respected Mel. In essence Mayor Green unwittingly endorsed his own competitor and Mayoralty challenger! One of the greatest political gaffes in Township history.

Many believe that which ever of the two incumbent Mayor Green challengers demonstrates the best and most momentum over the crucial next 10 or so days will most likely get a large wave of support by the uncommitted and by those who feel anybody but the incumbent should win.


This Editor has transcribed these Mel's Speech highlights: 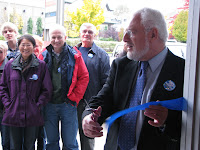 "This election is all about trust. Trust is the reason I'm running.The trust in Langley Township has been broken. It can never be repaired."

"We have had a very difficult time. We had arguments among ourselves over how we are going to deal with that broken trust."

"We need to do a long term financial strategy again...together with a long term growth study and bring them together...and you need transportation  as well."

"How do you develop your community, your transportation networks and how do you pay for it? We will be working on that together bringing the best financial minds along with the planning minds. We have wonderful staff. You just have to trust them. That's not going on in City Hall right now." 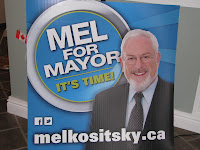 "It's all about co-operation. We don't agree but Langley City doesn't want to get married  (amalgamation/reunification) again, so we have to co-operate and make things work the best we can."

" Key issues in the next term will be the settlement of our (Langley Township) union contracts. Civil servants, CUPE and the fire fighters. Renewal of the RCMP contract and continued orderly growth and planning." 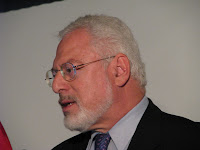 Posted by Langley Free Press at 10:18 am