Letters to the Editor of THE PROVINCE re Dickson Pit process fiasco! Can you guess which letter is a Mayor Alberts supporter? 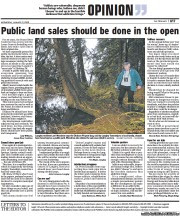 Public land sales should be done in the open

For 30 years, the Fraser River Coalition has protected the Lower Fraser’s dwindling wetlands, now only 11 per cent of their original size. We have repeatedly pressed for public involvement before, not after, the fact. A short notice sandwiched between... read more...
Related:
REAL ESTATE I Prices in many areas have doubled since 2002 Average single- family valley house up 92% in five years
Tech Tags: The Province newspaper Opinion

Posted by Langley Free Press at 6:59 am