Referring to Transportation Minister Kevin Falcon's unusual personalized letters delivered late Friday afternoon (see previous LFP posting) to each member of Township council, Mayor Rick Green comes out publicly today in the Province saying: "The letters are threatening. They are not appropriate." and that: "There are always other options.", obviously very strongly suggesting that he will not be supporting the overpass as presently proposed. Mayor Green has generated a lot of press recently in all the major newspapers including today's Globe & Mail as well with extensive quotes from Mayor Green on the recent gangland flurry of shootings in the Langley area as well.
--MOUSE CLICK PICTURE OF PROVINCE PAGE FOR BEST VIEW BELOW-- 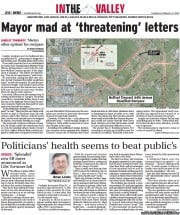 Posted by Langley Free Press at 9:38 am