Have you noticed that on any and all major Langley issues that our Langley MLAs Rich Coleman & Mary Polak seem to pull off a traditional disappearing act with no comments nor any help on any real controversial issue. Not a peep on the LEC P3 fiasco nor on the Liberal's tragic plans for Brown Pit either and the list goes on. This silence is even more deafening with the upcoming May 12 provincial election! Not mentioned in this Lewis article is that Councillor Kim Richter got this motion approved at Monday's council meeting against the Provincial Brown's Pit plan;

"Whereas opening the Brown's Pit for gravel extraction will create considerable difficulties in the surrounding neighbourhood and could significantly and adversely impact water quality and quantity in the Hopington aquifer; therefore
Be it resolved that the material from the Brown's Pit delegations of January 19, 2009 be referred to staff for a report and a recommended action plan to stop the re-opening of this pit for gravel extraction." 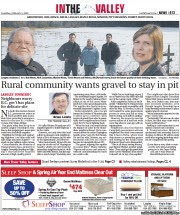 No doubt the election-bound B.C. government wants as much positive spin as possible from yesterday's announcement for the new $3.3-billion, 10-lane Port Mann Bridge. But given what they're up to in nearby Langley Township in relation to this...read more...
Tech Tags: The Province newspaper News