More on the the Langley MLA Rich Coleman & Mary Polak complaint investigation as reported by by Province columnist Michael Smyth. 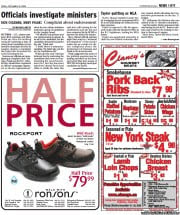 VICTORIA — B.C. cabinet ministers Rich Coleman and Mary Polak say they did nothing wrong by endorsing a slate of school board candidates in last month’s municipal election in Langley, despite a complaint they may have breached the Local Government...read more...
Tech Tags: The Province newspaper News

Posted by Langley Free Press at 5:40 am