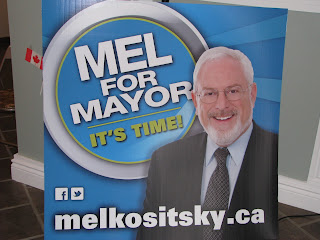 The Sign Wars of 2011 have started and obviously as of midnight last night the three Langley Township Mayor candidates were off and running to garner the choice locations in the dark of the night. When it comes to the best sign of any of the contending Mayors the hands down winner is Mel Kositsky. His name is prominent, his web site is clear & prominent. His picture stands out large and in fact is the only one of the three that
has a great picture. "Mel for Mayor - It's Time" logo is catchy short and to the point. The artwork is bold, colourful & very professional. The overall sign graphics is modern classy, professional and dead on. First prize blue ribbon on signs goes to Mel Kositsky. He wins hands down by a country mile.  Mel's sign has swag! 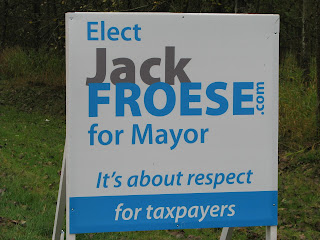 Jack Froese's signs come in second and not a close second either. We question why there was no picture considering as Jack is a political newcomer and voters won't be able to put a face on his candidacy. But his sign scores points by having his name larger than anyone else's signs. Name is key but again the huge 'Mel for Mayor' logo is still far more catchy and memorable. Colours are nice but the baby blue  is too understated, too soft and easy going and not quite as clear in bringing out the message. Too soft is not a message any Mayor ever wants to portray in this Editor's opinion. Jack's full length body picture in his print ads would have been much more effective on his
signs. 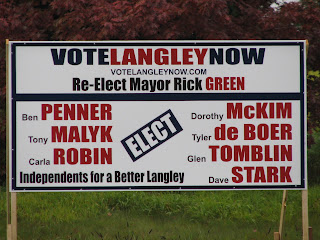 The clear Mayors' sign wars loser is incumbent Mayor Rick Green with this tragic mish mash that essentially says: " don't look at me I'm ugly, busy, boring and hard on the eyes". Why would anyone design it so Rick is in black & Green is in Red?  His name and his slate-mate's names are lost in this busy amateurish collage that a two year old would create. Green's name is clumsily off center and the names and sheer volume of writing/information is tiresome, tacky and plain ugly. Whoever designed this sign must have gone to the design school of schlock. The slate-mates should put their graphic designers out of their misery and never use this firm for anything but perhaps graphics for more somber events. I specifically point out the black sign border and the double solid black line through the top third that reminds one of a wake not an election! But then again maybe the designer of this sign foresees the future and is really a sabotaging closet Kositsky or Froese supporter, 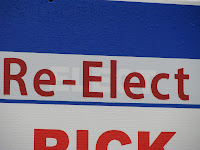 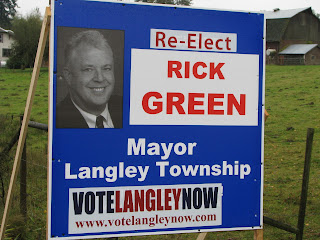 Either the Green campaign saw the same issues that this Editor noted above or perhaps simply ego got in the way that caused the Green campaign to re-use their last election's signs too. But tacky still rules the day as stick on coverings were applied to three portions of the old Green signs. Very cheap semi transparent stick ons were used.  The above picture to the left clearly shows that you can see the old original elect under the sticker! We can hardly wait to see these cheap stickers droop and start to peel off that will just enhance tacky. The VLN stick on at the bottom covers up something too. Our bet is that this is where it used to probably proudly proclaim that Green was an Independent candidate! What a joke. The B&W head & shoulders picture also looks more like a high school graduation book picture in this editor's opinion. At first I did not recognize who it even was! In a nutshell both signs are knuckle draggers that epitomize tacky. 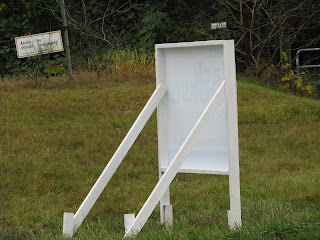 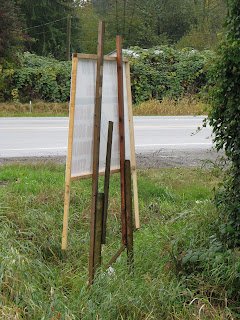 On another note we found it very interesting insofar as Jack Froese's signs were installed with quality 2 by 4's and most significantly of note is that this is the first time this Editor has ever seen a sign that had the supporting wood painted to match the sign colours. Amazingly the Froese campaign went as far as painting the wood white (see picture above) and even though you can't see it in this picture the small stakes tops were painted baby blue too! Unbelievable but true. This Editor gives Kudos on the details to Jack's team and does make this Editor wonder if this means the attention to detail is a great indicator of him as Mayor or whether he will just be bogged down on unnecessary detail?

This last picture shows you what unpainted wood looks like. This is Green's sign and note the small slats of cheap wood but look closely at the  intricate craftmanship of the wood supporting the sign. NOT! This sign and it's support construction screams cheap-tacky once again. Maybe this is an indicator of the true support propping up Green and his slate-mates.