The Province refers to the constant challenges to Mayor Rick Green from incumbent Councillors like Grant Ward, Mel Kositsky, Steve Ferguson and especially Jordan Bateman (much rumoured to be savouring the next challenge to Green for his Mayor's chair) who are constantly it seems at odds with Mayor Green's new directions. What or who are they trying to protect by their stubborn refusal to try new things one has to wonder?

The Province posts comments as clear evidence to this fact;

"To this day, some remain shocked over his win — including a few on the eight-member council, where all but one is an incumbent. Consequently, the rookie mayor who campaigned on the need for change, an end to higher-than-inflation tax increases, and a call for fiscal responsibility, joins a council that’s joined at the hip with the past."
TO BETTER READ the whole PROVINCE ARTICLE doubleclick Mayor Green's Picture BELOW 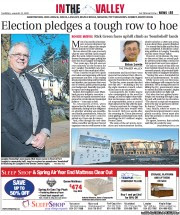 Election pledges a tough row to hoe
Brian Lewis
The Province
22 Jan 2009
community and faced three-term mayoral incumbent Kurt Alberts, Green scored perhaps the biggest upset in November’s civic elections. To this day, some remain shocked over his win — including a few on the eight-member council, where all but one is an...read more...