Do you know which narcissists YOU recently elected ? How many of the attached newspaper's criteria apply to them ? Check them off to identify your very own narcissistic Langley politicians! I count at LEAST 2 easily enough without even trying! Hint they are always lobbying hard to get their pictures often in both Langley papers! Both papers easily accommodate!

Bigger Hint, they are both males (over 95% of narcissists are always predominantly male) both are certainly politically self infatuated and ambitious and certainly also clearly dislike each other and will most certainly run against each other as mayor candidates with very ruthless and very characteristic self important and expensive vanity campaigns in
the very next election!

OTTAWA CITIZEN references nine traits of narcissists
"The American Psychological Association identifies nine traits of narcissists, five of which need to be present for a Narcissistic Personality Disorder (NPD) diagnosis: ■ Feels grandiose and self-important for reasons not supported by reality ■ Obsesses with fantasies about unlimited success, fame, power or omnipotence ■ Believes he/she is unique and special and can be understood by and associate with only other unique or high-status people ■ Requires excessive admiration, adulation, attention and affirmation ■ Feels a sense of entitlement ■ Exploits others without guilt or remorse ■ Is devoid of empathy ■ Tends to be envious of others or believes others are envious of him/her ■ Displays arrogant and haughty behaviour."

Narcissism Primer Aid:
Inordinate fascination with oneself; Excessive self-love; Someone in love with themselves;. Vanity; A pattern of traits and behaviors which signify infatuation and obsession with one's self to the exclusion of all others and the egotistic and ruthless pursuit of one's gratification, dominance and ambition; Admiration of one's own physical or mental attributes; Being a normal condition at the infantile level of personality development; egotism or simple selfishness; It is sometimes used to denote elitism or an indifference to the plight of others. 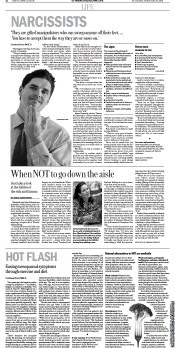 The American Psychological Association identifies nine traits of narcissists, five of which need to be present for a Narcissistic Personality Disorder (NPD) diagnosis: Feels grandiose and self-important for reasons not supported by reality Obsesses...read more...

Posted by Langley Free Press at 11:27 am