So in an earlier Vancouver Sun article before we read that BC Provincial Liberal MLAs got free Olympic tickets to go to the Olympic events. The Provincial Libs said it would only be used to accompany approved government business associates! Yeah right!

Now we hear that the feds have 1st class olympic tickets without having to wait in line. Meanwhile our whole family after 3 times trying the Olympic lottery for tons of tickets
secured only one nose bleed ticket at a second rate event. Talk about featherbedding!

Are any of our local politicians going and where and how did they get their tickets or are they going with other people's or sponsors tickets? Do ANY of our local politicians get free Olympic tickets or even in my mind worse tickets that they pay for and did not have to enter the lottery for? Or did they get free or preferential tickets and maybe even worse gave it to friends, family or business associates or despicably sell them for unimaginable profits? Who is going to ask this of ALL of our municipal. school board and especially MLAs Rich Coleman, Mary Polak and MP Mark Warawa? If nobody asks its a travesty. Because you all know that if LFP asks them we will never get an answer! Come on guys, get clean and fess up. 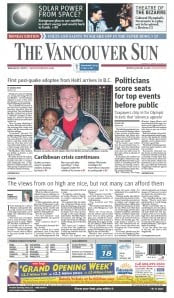 The federal government is using its access to Olympic tickets to give priority to politicians, bureaucrats and others who will get some of the best seats in the house during the Winter Games next month. Of the nearly 1,500 tickets that the government...read more...